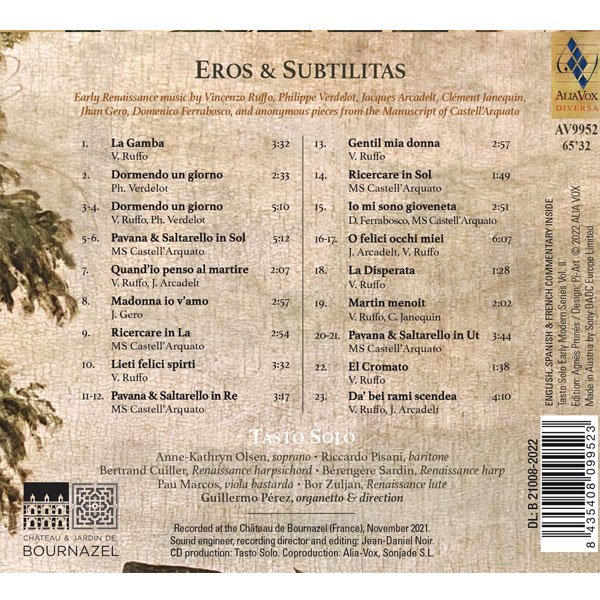 Thinking how much music flourishes in our
times, not only that which consists of vocal
harmony, but that of instruments…

The human voice is consistently praised in the treatises of the Renaissance as the “superior” and “worthy” model that musical instruments should strive to imitate; yet this is perhaps the result of a consensus that was more academic than practical. Indeed, the current revival of historical music has shown that the reconstruction of original instruments and the rediscovery of their playing techniques is a major path to understanding ancient repertoire, whether it is played or sung. Instruments and voices are, in short, part of an ongoing dialogue of a past universe, from which today only the traces of certain stars and firmaments can be seen.

The music of 16th century Europe formed one of the richest constellations, where there was a frenetic arrival of novel works and methods devoted exclusively to the development of the language and practice of instruments in parallel with the vocal arts. Italy was particularly fertile ground, cradling the development of the virtuoso praxis of glosa or diminuzione; the compositional exploration based on fantasia called ricercare; and the diffusion of an endless number of compositions derived from the world of dance. It was also in Italy that we find the first documented use of the term capriccio to name an instrumental composition, giving way to the Capricci in Musica a Tre Voci by Vincenzo Ruffo.

Printed in Milan in 1564 during Ruffo’s tenure as chapel master in the famous Duomo, the Capricci are a singular collection of 23 small pieces. They are the author’s only work for instruments—devoid of text—and his last publication of secular music before he devoted himself exclusively to liturgical music and to the spread of the Tridentine Promulgation. The Capricci are a true example of mastery in the art of Renaissance counterpoint, whether written on vocal lines borrowed from madrigals of his contemporaries, mostly with love-themed poetry (as is the case with Verdelot’s Dormendo un giorno and Arcadelt’s O felici occhi miei); after dance-related melodies (La Gamba); or using new, freely created motifs presented under evocative titles (La Disperata, El Cromato, El Pietoso…). Moreover, Ruffo deploys a subtle yet intricate rhythmic language in these pieces, evoking the intellectual aesthetics of the late medieval musical period—surely known by Ruffo’s teacher in the cathedral of Verona, Biagio Rossetto, who was well versed in medieval theory. In his dedication of the Capricci to Marco Antonio Martinengo, the count of Villachiara and a notable amateur musician, Ruffo mentions the complexity of this work and indicates that it is suitable for “virtuosi”—a virtuosity that applies both to the technical difficulty of the pieces and to the musical flexibility required by their demanding and refined style. Puzzlingly, Ruffo mentions the existence of his Capricci prior to their 1564 edition, and having heard Martinengo “sing them so beautifully.” Was he referring to a possible vocal and instrumental performance, or perhaps acknowledging the occasional ambiguity of the word cantare in the Renaissance, meaning either singing or playing? These unknowns, in addition to the uniqueness of the Capricci for its time and its individuality in Ruffo’s catalog, place this work in what musicologist Nino Pirrotta described as “the ample space that exists between the extremes of written and unwritten traditions, which are nothing more than broad generalizations.” This is a space where unique cases, geographical and chronological peculiarities, exceptions, and hybridizations coexist, all of which are part of the infinite beauty of early music.

The three pairs of Pavana and Saltarello presented on this disc come from another equally unusual source, the so-called Manuscript of Castell’Arquato. Preserved in the archives of the collegiate church of this small Italian town near Piacenza, the volume contains simple, undecorated fascicles copied anonymously around the middle of the 16th century with music for keyboard and possibly for other polyphonic instruments such as the harp. The repertoire transmitted in this manuscript is considerably varied and includes, in addition to fragments of motets and sacred music, an important corpus on bass lines (romanesca, passamezzo antico, and moderno), and dance songs, most of which are unique and without concordances. The manuscript also preserves a large selection of ricercare, some by unknown authors (this is the case of tracks 9 and 14) and others composed by famous Italian keyboardists active in the first decades of the cinquecento, such as Fogliano or Cavazzoni. Completing this valuable treasury are a dozen madrigals and songs that are examples of the diverse procedures of copying, adaptation, and ornamentation carried out by Renaissance instrumentalists after vocal works.

It is precisely the voice and its repertoire that completes this recording and gives full meaning to this project as a whole. In the madrigals by Verdelot, Ruffo, Arcadelt, and Gero, we have preserved the sung upper voice, and also sometimes the bass, allowing the listener to concentrate on a single melodic line, while the other voices of the polyphony are transformed into an instrumental accompaniment. This mode of execution, widely documented at the time—and which connects the techniques used in instrumental arrangements such as those of Castell’Arquato—represents the continued practice of accompanied melody in the Renaissance, born in the Middle Ages and reaching all the way to the opera. Thus, an aesthetic is created giving full prominence to the expressiveness of the solo voice, with all of its character and flexibility, in contrast to other standard modes of singing a cappella polyphony. On the other hand, in some of Ruffo’s Capricci it is the voices that integrate into the ensemble of instruments, singing the parts and texts of the works that Ruffo used as a basis for his new compositions. In the Capricci after Dormendo un giorno and Quand’io penso al martire, or in the mischievous Martin menoit based on Janequin, it is the voices that merge with the language of the instruments, assimilating their articulations and phrasings. The program reaches its climax in the last piece, Da bei rami scendea, in which the voices of Arcadelt’s original madrigal are superimposed and intertwined with those of Ruffo’s version to celebrate the “reign of love.”

The instruments used in this recording are representative of early Renaissance Italian culture and the realm of chamber music: a small harpsichord without dampers in its high register, a single-course harp, a viola da gamba, and a lute. In some of the works I have considered it appropriate to use an organetto, although it is indeed an instrument that fell out of use in the course of the 16th century. In spite of this chronological limit— albeit imprecise—several reasons have motivated this choice. Firstly, as Tasto Solo´s previous recording Early Modern English Music showed, the history of this instrument is enormously rich in the last years of the 15th century, especially in Italy, and it is still documented in the early 1500s. Therefore, it would be nonsense to state that an instrument completely ceased to be played after a precise date, and ironic, considering our current early music scene that increasingly gives more and more space for pure anachronisms and crossover. Furthermore, the organetto, in addition to its similarity to the flute or to the cornetto, brings an archaic sound in keeping with the flashes of medieval elements still present in the Capricci in Musica a Tre Voci and in the language of the early Renaissance. The musicians of the past lived with great admiration for their predecessors. Works of the fourteenth and fifteenth century were copied well into the Renaissance and beyond. Petrarch’s poems were a source of inspiration for many composers through the ages. And ancient instruments, even if only sporadically, were ready to reappear at any time, either because of their symbolism or their fascinating sonorities.