Couperin is too easily seen as the tender, graceful and somewhat melancholy composer, whose soft-toned palette was the same as that which served the brush of Watteau. There was another Couperin who was a master of humour and whose claws were sharp. And yet another who was a musician involved in the aesthetic battles of this time and in the avant-garde. There were great battles, like the one to which the lovers of Italy rallied, and which led him to write, at the age of twenty-two or twenty-four, the first sonatas to appear in France. There were skirmishes, like that in which the sworn masters of the guild of minstrels opposed the royal musicians. In each case we find him participating zealously and actively – but also translating his own positions into music with his characteristic skill and lighthearted humour. 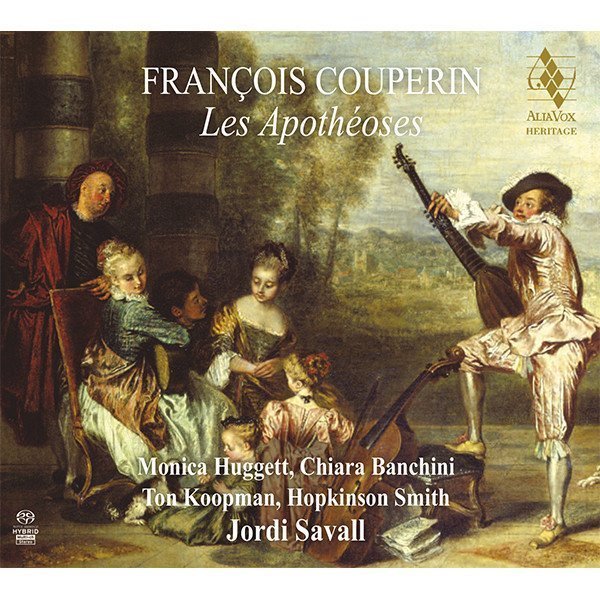 Couperin is too easily seen as the tender, graceful and somewhat melancholy composer, whose soft-toned palette was the same as that which served the brush of Watteau. There was another Couperin who was a master of humour and whose claws were sharp. And yet another who was a musician involved in the aesthetic battles of this time and in the avant-garde. There were great battles, like the one to which the lovers of Italy rallied, and which led him to write, at the age of twenty-two or twenty-four, the first sonatas to appear in France. There were skirmishes, like that in which the sworn masters of the guild of minstrels opposed the royal musicians. In each case we find him participating zealously and actively – but also translating his own positions into music with his characteristic skill and lighthearted humour.

The battle between the Muses – the Italian Muse and the French Muse – had fired up the whole of the seventeenth century, whose history was a vast battle-field in which the Italian troops led by Cavalli or Rossi under the banner of Mazarin advanced and were repulsed by the supporters of the “ballets de Cour”, with tactical withdrawals from the composers of the “airs de cour” and counter-marches from the virtuosi, until the final victory of the renegade Lully, who betrayed his side, seizing the French banner after having changed to a y the Italian ending of his name. This aesthetic struggle should not be taken lightly: it was a serious matter which often affected the very destiny of French art. When Couperin was born, a forced truce succeeded in turning back for ever the transalpine invaders. Lully had his unquestioning supporters, his fanatics. But secretly Italy was re-arming hers, and the early years of the eighteenth century would see Italians and lovers of the beauties of Italy entering the fray again.

It is against this background that the work of François Couperin was written. The attraction of Italian music influenced him first. It was in its name that he first engaged in music, with the zeal of youth. Infatuated with Corelli, it was under an Italian pseudonym, that he presented his first sonata – which was also the first to be composed in France. In the eyes of his contemporaries he was, as the Lullyist fanatic Lecerf de la Viéville scornfully noted – “the passionate servant of the Italian”. Couperin never denied this vein. But, as he grew older, his great achievement would be to attempt the synthesis which he himself was to call “the styles reunited”. This did not represent an inconsistent neutrality but a bilateral engagement, destined to increase the qualities of both styles of music. To the greater richness and melodic generosity which he had learned from Italy, he brought more measure, a more delicate sense of fragility of forms and a taste for the dance which characterized French musical sensibility. Couperin belonged to the country of Descartes in his lucidity and clear consciousness of what he has doing and seeking: and it was in this that his work displayed “commitment”. He did what he wanted, but he said why. It was no longer enough even that he said it: he proclaimed it, but with a smile and a wink which established a modicum of objectivity.

L’Apothéose de Corelli (1724)  and L’Apothéose de Lully (1725) were two declarations of intent, two proclamations of faith, two messages of acknowledgement – and two affirmations, both strong and ambiguous at the same time, by Couperin himself, through the two great ancestors to whom he paid homage. “The Italian and French styles have for a long time (in France) shared the Republic of Music; in my view, I have always admired the things which deserve it, without regard to Composers or Nationalities; and the first Italian sonatas which appeared in France more than thirty years ago, and which encouraged me to compose some afterwards, did no harm, in my opinion, either to the works of Monsieur de Lully or to those of my ancestors, which will always be more admirable than imitable. Thus, by a right which gives me my neutrality, I still sail under the lucky flags which have hitherto been my guides.”

It is a sonata in the Italian manner, the largest and strongest that Couperin ever wrote. It is not a pastiche, but a serious and grave work that is consistently beautiful, harmonious and noble: it is in this respect, rather than in similarity of style, that it is a homage to Corelli. Each movement is provided with a title, one which is neither an argument or a commentary, but a little wit superimposed on the music, which remains “pure”.

Corelli at the foot of Parnassus begs the Muses to receive him into their midst (gravely).

Corelli, delighted by the good reception given to him on Parnassus, expresses his joy. He continues with those who accompany him (gaily).

Corelli, drinking at the Fountain of Hippocrene, his Flock continues (moderately).

A limpid movement, the only one that could be considered descriptive, with long, sustained notes, smooth dissonances evoking the sacred fountain which gushed forth when Pegasus struck the ground with his hoof.

Corelli’s enthusiasm aroused by the waters of Hippocrene (lively).

A short, almost concertante, movement, with fleeting and shivering string figures which recall Corelli’s reputation for playing “like one possessed”.

Corelli, after his enthusiasm, falls asleep; and his Flock plays the following slumber (very softly).

Sommeil, like those found in many Italian operas of the time, but also in the Sinfonie da chiesa, with admirable harmonic refinement.

The Muses awaken Corelli and place him alongside Apollo (lively).

This is a tromba, with dotted figures and semiquaver triplets achieving a joyful effect.

One of Couperin’s finest fugal movements, based on a fine theme of Italianate build, almost more like Vivaldi than Corelli.

The title is grandiloquent and emphatic, but it reveals the humour of Couperin; it would seem to be addressed to the worshippers of the Surintendant with their own hagiographic jargon… In every bar of this new work we can find humour, tinged with seriousness: this immediately sets it apart from L’Apothéose de Corelli, which was a sonata provided with titles; this is true programme music, whose wit might escape us if we did not know what it was about.

Lully in the Elysian Fields, concertizing with the lyric Shades (gravely).

This is a grand operatic ritournelle in a simple style like that of Lully. In the Elysian Fields Lully was clearly in charge. Even there he found a way to be director (Surintendant).

Air for the same (gracefully).

This is a kind of Entrée de Ballet with dance rhythm.

The Flight of Mercury to the Elysian Fields to announce the descent of Apollo (very quick).

This was a direct allusion to the operatic scenes in which the gods were preceded by messengers.

Descent of Apollo who comes to offer Lully his violin and his place in Parnassus (nobly).

This is an orchestral piece, traditionally used in opera, to celebrate the majesty of the event, and to cover up the noise of the machines…

Couperin begins to amuse himself. Those jealous of Lully were the Italians and their imitator whom he had destroyed and who brooded on their vengeance. Hence the style, different to that of the opening, which came straight from the other side of the Alps.

Complaints of the same: by the Violins much softened (dolefully).

Were they complaining in French?

The raising of Lully to Parnassus (very lightly).

A little embryo of the fugal style, with a few Italianate syncopations …

Part friendly, part aloof reception given to Lully by Corelli and the Italian Muses (largo).

This is built upon a typical Corellian moving bass.

Lully’s thanks to Apollo (gracefully).

Apollo persuades Lully and Corelli that the reunion of the French and Italian styles must be perfection in Music. Essay in the form of an Overture.

Corelli greatly admired the Overture to Armide, which he had had framed: it is therefore not at all surprising that Apollo-Couperin should greet the reconciliation of the two rival styles with an overture in the French style, somewhat Italianized!

Here Couperin was clearly enjoying himself with this little duet in the form of a double pastiche, in which each of the two styles appears in turn. It is one of the most attractive examples of “in the style of…” music.

The Peace of Parnassus, made on condition, following complaints by the French Muses, that, when their language was spoken, one would henceforth say Sonade, Cantade, just as we say Ballade, Sérénade and Sonade en Trio.

Here are the “Goüts réunis”: the French Muses play the first violin part, the Italian Muses the second. The fusion of the genres is perfect, the synthesis ideal.

The triumph of Apollo … and of Couperin!

Add your own review
User Reviews
/