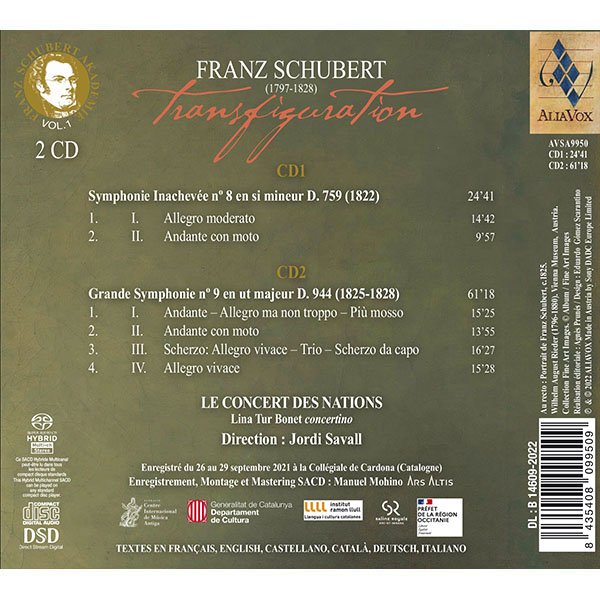 Without fear of being indiscreet, we can now admit that we were thinking of devoting our energies to Schubert’s Symphonies 8 and 9 immediately after finishing our cycle of the complete Beethoven symphonies, which, after a year’s delay as a result of Covid, concluded with the concert on 15th December, 2021, at Barcelona’s Gran Teatre del Liceu.

Having said that, this idea of a symphonic cycle with Le Concert des Nations focusing on the principal composers of the 19th century began much earlier, in 1993 in fact, when we were preparing Beethoven’s Third and Juan Crisóstomo de Arriaga’s Great Symphony for the recording we made in January, 1994. Unfortunately, lack of funding on the part of our recording label AUVIDIS forced us to shelve the project. This was one of the reasons why we decided to create our own recording label ALIA VOX in 1997.

However, it was not until 2017 that we were able to resume our idea of a major symphonic and choral cycle with the concerts and recordings of Mozart’s last three symphonies, which we began to prepare and record in 2017 and finished in June 2018. With the establishment of our major Academies for young professional musicians in the spring of 2019 we were able to start work on preparing Beethoven’s complete symphonies, a heroic and at the same time wonderful project, which, notwithstanding Covid, culminated in November, 2021, with the release of the album comprising the last four symphonies. During the Professional Academies in the summer of 2021, just after having spent two intense years in the company of Beethoven, we turned our attention to Franz Schubert’s Symphonies 8 and 9 with our period-instrument orchestra Le Concert des Nations, which brings together more than 60 professional musicians from all over Europe and other countries around the world, including young professional musicians specialising in performance using period instruments.

While what struck us the most about Beethoven’s creative process was his extraordinary imagination and revolutionary inspiration, in the case of Schubert it was the composer’s intimate and fraternal relationship with suffering and death that we found most moving. This explains why, in the creative process of Schubert’s musical language, we never fail to be amazed by his capacity to engage with that essentially inward, spiritual dimension, that transfiguration, which he sums up so simply in a sentence from his diary in March, 1824: “My works are the fruit of my musical knowledge and my pain.”

Beethoven’s nine symphonies had brought the sonata form to heights that were impossible to surpass without a radical change of direction. Schubert succeeded in finding a personal solution, albeit not without effort.

We know the answer given by the 15-year-old Schubert to his dear friend Joseph von Spaun (1788-1865) when the latter said to him: “You have already done a great deal, and in time you will do many more great things” Schubert quietly answered: “Calmly, and in secret, I hope that I can still do something of my own, although what can one do after Beethoven?”

In terms of historical context it is interesting to note the close proximity and coincidence in time between the years 1817 and 1823 in which these various symphonies were composed and the difference in age of their respective composers: it should be remembered that during those years Beethoven, then more than 50 years old and at the height of his fame as a composer and creator of a truly revolutionary symphonic style, was finishing the composition of his last choral symphony, whereas in 1821-1822 Schubert, still little known as a composer of symphonies, wrote his Unfinished Symphony in B minor aged 25 in 1822. We know the first two complete movements: Allegro moderato and Andante con moto, but the first twenty bars of the beginning of a totally or partially orchestrated scherzo also exist in manuscript form, as well as an unorchestrated sketch for the same scherzo, which ends at the beginning of the trio. The symphony is thus –in fact– unfinished.

But is it really unfinished? What actually happened?

His friend Joseph Huttenbrenner wrote in 1868: “The Symphony was in my possession for many years and Anselm made a piano transcription of it for four hands [in 1853]. Schubert gave it to me as a token of his gratitude for the honorary diploma from the Graz Musical Society, dedicating it to the Society and to Anselm. I delivered the diploma to Schubert. The Symphony in B minor, which my brother and I consider to be equal to a Beethoven symphony, had not yet been accepted by any orchestra.”

At this point, I would like to quote the profound and illuminating words of Brigitte Massin (1927-2002), with which I fully agree, concerning the life and work of Schubert: “We know that, spurred on by the number, quality and urgency of his ideas, Schubert sometimes abandoned a composition to begin another. It is perhaps to this wealth of ideas racing ahead of each other that must look for a more or less satisfactory explanation of what might be called the mystery of the Unfinished Symphony.” In spite of its name, the symphony is now accepted as complete, thanks to the special and palpable unity binding its two movements: Allegro moderato and Andante con moto.

“This unity between the allegro and the andante”, Brigitte Massin reminds us, “seemed so obvious, so intentional to the German musicologist Arnold Schering (1877-1941), that he discerned in the Unfinished Symphony a true musical transfer of the composer’s contemporary literary text, also written in two parts, entitled Mein Traum (“My dream”), which Schubert wrote in July, 1822, thus explaining the unfinished nature, or rather the completeness, of the work. Without venturing so far, we can say that never before –at least in his symphonic music– had Schubert given such adequate musical expression to what he had formulated three months earlier in Mein Traum as one of his innermost thoughts:

Beethoven composed his last symphony between 1817 and 1823 and it was premiered in Vienna on 7th May, 1824, conducted by the composer himself and the Kapellmeister Michael Umlauf. In fact, this was to be the composer’s last public appearance, and for the next three years he remained confined to his home, stricken with various ailments which led to his death on 26th March, 1827, after 54 years of a dramatic but highly creative and intense life, and having won unanimous success and recognition.

In sharp contrast, on 16th November, 1828, a year and a half after Beethoven’s death, Franz Schubert also passed away, surrounded by some of his closest friends, most probably due to his poor general health, which prevented him from withstanding the sudden worsening of the typhoid fever from which he was suffering. A few months after finishing his Great Symphony in C major, and while he was still correcting the second part of his Winterreise, Schubert died a young man, one month and fifteen days before his 32nd birthday.

Let us go back to the beginning of 1828 (one year after the death of Beethoven on 26th March, 1827). As Brigitte Massin writes, “it was then that Schubert, in full possession and in full bloom of his creativity, was finally able to offer the world the first Great Symphony of his adult life, overcoming an accumulation of inner prohibitions and years of hesitation to triumph in this field. It was his Ninth or Tenth Symphony, and he was 31 years old. By way of comparison, at almost the same age (29) Beethoven composed his First Symphony.”

“And yet,” continues Brigitte Massin, “the Symphony in C major is more properly a continuation of the Unfinished Symphony in B minor, of which it appears to be the culmination, than a continuation of any of his other previous symphonies. Compared with its predecessors, the Symphony in C major attempted to translate into symphonic expression the depths of introverted thought, whereas the six preceding symphonies were extrovert in nature. The Symphony in C major resolves the contradiction that Schubert had found to be irreconcilable at the time of writing his Symphony in B minor: to translate, accustomed as he was to the simplicity and psychological refinement of the lied, the mystery of the inner world by means of symphonic language. […] The structural similarity between the first nine bars of the two works (and of course beyond them) is so striking that it suggests a need, perhaps unconscious but also perhaps conscious, to take up the challenge that the incompleteness of the Symphony in C major poses for the composer. Meeting that challenge and ultimate victory would be found in the transfiguration of B minor into C major.”