By the end of May, 1723, Johann Sebastian Bach had finally been appointed cantor of the four churches in the historic centre of Leipzig. That moment marked the beginning of the last stage of Bach’s life, undoubtedly one of the most intense from a creative point of view. Over the following six years Bach was to take on the huge task of writing at least four complete cycles of cantatas for the entire liturgical year. In practical terms, this meant composing about sixty cantatas per year corresponding to all the Sundays and holy days of obligation. An impressive feat which, moreover, he had to combine with his responsibility for liturgical services as director of the choir of St. Thomas’s Church. 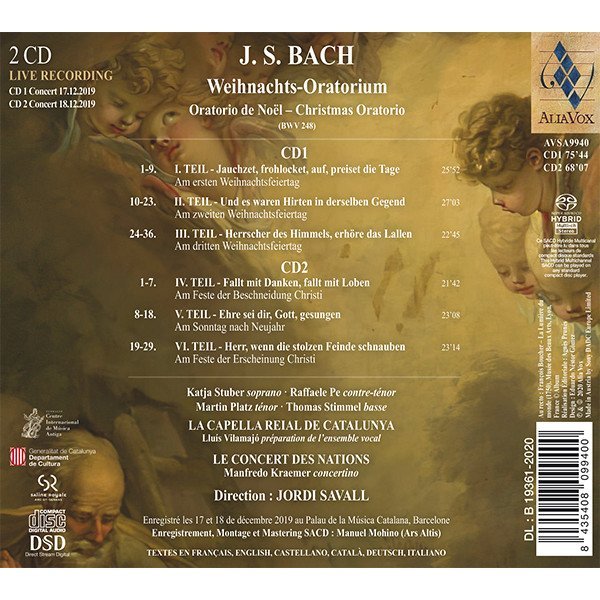 By the end of May, 1723, Johann Sebastian Bach had finally been appointed cantor of the four churches in the historic centre of Leipzig. Although he was not initially the winning candidate, as the next in line Bach found his path unobstructed when, for various reasons, Georg Philipp Telemann and Christoph Graupner, the first and second choices, respectively, decided not to take up the position. That moment marked the beginning of the last stage of Bach’s life, undoubtedly one of the most intense from a creative point of view. Over the following six years Bach was to take on the huge task of writing at least four complete cycles of cantatas for the entire liturgical year. In practical terms, this meant composing about sixty cantatas per year corresponding to all the Sundays and holy days of obligation. An impressive feat which, moreover, he had to combine with his responsibility for liturgical services as director of the choir of St. Thomas’s Church.

At the end of those first six years, Bach seems to have entered a second creative period. On the one hand, he had produced more than a sufficient number of cantatas to meet the liturgical musical requirements for years to come, during which time he would compose only a fifth complete cycle. He therefore completed a total of three hundred cantatas, of which just over 60% survive. On the other hand, the composer’s thorny relations with the ecclesiastical authorities of that Lutheran community had probably also left him somewhat disenchanted. All of these factors no doubt came into play when in 1729 he accepted the new post of director of the Collegium Musicum, founded in 1704 by Georg Philipp Telemann. It was an amateur orchestra consisting chiefly of students from the University of Leipzig, who rehearsed in one of the rooms of the bustling, centrally located Café Zimmermann. Much of the creative energy that Bach had previously poured into the composition of liturgical material was now turned to preparing the new repertory of the Collegium Musicum, which comprised mainly orchestral works. These were often adaptations of original compositions that Bach had written during the years when he was employed as Kapellmeister in the service of Prince Leopold of Anhalt-Köthen. They were mostly concertos for solo violin or oboe, many of which are now lost, which in Leipzig were transformed into concertos for harpsichord and orchestra. Of course, for special occasions Bach composed a large number of what are today known as secular cantatas, many of which were composed to celebrate significant events in the city of Leipzig, such as festivals or visits by members of the family of August the Strong, the Prince-Elector of Saxony.

To mark the Christmas celebrations of the winter of 1734-1735, Bach decided to compose a cycle of cantatas to fulfil the liturgical requirements for that period, which basically involved covering the usual seven days of festivities: in other words, December 25, Christmas Day; December 26, St. Stephen’s Day; December 27, St. John’s Day; the Sunday before New Year; January1; the Sunday before Epiphany and, finally, January 6, Epiphany. It so happened that in 1734, December 26 fell on a Sunday, and in consequence Bach only had to compose six cantatas to cover all the Christmas services that year.

One of the most striking features of the material that Bach used in his Christmas Oratorio is that it consists of “parodied” movements, that is to say, material borrowed from some of the aforementioned secular cantatas that he had written for the Collegium Musicum in earlier years. Thus, throughout the work we hear fragments of Cantatas BWV 213 and BWV 214, composed in 1733, as well as BWV 215, written only a few months before Christmas 1734, and even a lost cantata, which was the source for practically the whole of the last part of the cycle devoted to the Epiphany. The task of adaptation naturally involved changing all of the lyrics and subsequently adapting the music to the new liturgical text. We might therefore view this oratorio as a concise compendium of Bach’s work curated by the composer himself. Another case in point is the extraordinary Mass in B minor, a complete Catholic mass with all the parts of the Ordinary of the mass, constructed from the fragments of diverse cantatas written by the composer in previous years. This is a technique at which Bach excelled, thanks to his talent for harnessing the essential expressiveness of the works concerned, modifying only what he regarded as circumstantial whilst in no way compromising the nature of the end result.

The structure of each of the six cantatas in this oratorio adheres to the format that the composer habitually used during the rest of the year. In other words, an initial chorus, followed by a selection of recitatives and arias, and concluding with a final chorus. One might therefore be forgiven for assuming that these were simply six routine cantatas. But, thanks to the librettist, the resulting work has an impressive overall unity. The libretto was very probably the work of Picander, the pseudonym of Christian Friedrich Henrici (1700-1764), who at that time worked for the Leipzig postal service and was also one of Bach’s regular collaborators. He is credited with the lyrics of the St. Matthew Passion, the St. Mark Passion, the Ascension Oratorio and various secular cantatas such as the delightful Coffee Cantata, among others… Picander conceived the text with a great unity of action, using fragments from the Gospels in the recitatives and endowing the remainder, his own original creation, with great dramatic force. Hence the close connection between the various cantatas, leading posterity to dub the work the Christmas Oratorio, even though it is not an oratorio in the strict sense, such as those which had emerged in Italy at the beginning of the 17th century.

Over the Christmas period, the cantatas in question were alternately performed at the two most important churches in Leipzig’s historic centre: St Thomas’s and St Nicholas’s. Sometimes they were even performed at one church in the morning and at the other in the evening.

The first cantata, corresponding to Christmas Day, describes the birth of Jesus. Its opening chorus “Jauchzet! Frohlocket!”, with the sudden entry of the timpani, is undoubtedly the most popular moment of the whole oratorio. This brilliant passage, taken from the beginning of Bach’s Secular Cantata BWV 214, invites us to sing with joy at the birth of Jesus. It also features an attractive aria for contralto, “Bereite dich Zion”, in which the soloist enters a dialogue with the oboe d’amore and violin, followed by the first quotation from the well-known chorale “O Haupt voll Blut” (O Head full of blood and wounds), which Bach repeated 5 times in the St. Matthew Passion, and which here is entitled “Wie soll ich dich empfangen”, a meditation on how we should receive the Infant Jesus. The trumpet returns in the brilliant bass aria “Großer Herr, o starker König” and in the final chorale “Ach mein herzliebes Jesulein”.

The second cantata, as is usual on St. Stephen’s Day, describes the annunciation to the shepherds. The pastoral element is clearly reflected in the opening instrumental sinfonia, which, like all pastorals, is written in siciliana rhythm, as if lulling the newborn Child to sleep. There is a beautiful dialogue between the solo tenor and the transverse flute in the aria “Frohe Hirten, eilt, ach eilet”. The aria for contralto “Schlafe, mein Liebster, geniesse der Ruh” coaxes the Infant to slumber with the sweet sound of the transverse flute and several oboes. In the extraordinary closing chorale “Wir singen dir in deinem Heer”, Bach returns to the siciliana pastoral rhythm.

The third cantata, corresponding to the feast day of St. John the Evangelist, describes the shepherds’ adoration of the Child. It begins with the cheerful chorus “Herrscher des Himmels, erhöre das Lallen”, in which Bach reintroduces the brilliant sonority of trumpets, timpani, transverse flutes and oboes. It also features the brief shepherds’ chorus “Lasset uns nun gehen gen Bethlehem”, the agility of which reflects the shepherds’ haste to reach Bethlehem. A little later we find the exquisitely optimistic duet “Herr dein Mitleid dein Erbarmen”, in which the solo soprano and bass sustain a dialogue with 2 oboes d’amore. More introspective is the aria for contralto “Schliesse mein Herze dies selige Wunder”, in which the dialogue is now with the violin. In the final chorus, Bach returns to the music used at the beginning of the cantata.

The fourth cantata, intended for New Year, describes the circumcision and the naming of Jesus. The solemn character of the opening chorus in ternary rhythm, “Fallt mit Danken fallt mit Loben” taken from Cantata BWV 213, is emphasized by the presence of the horns and oboes. The charismatic aria for soprano and oboe “Flößt mein Heiland” is also taken from Cantata BWV 213. It is distinguished by the use of sweetly charming echo effects between the voice and the oboe. In the da capo aria for tenor, 2 violins and continuo, “Ich will nur dir zu Ehren leben”, Bach displays his contrapuntal skill in an irresistible and dazzling four-part counterpoint.

The fifth cantata, corresponding to the first Sunday after New Year, describes the journey of the Magi. It begins with the impressive chorus “Ehre sei dir, Gott, gesungen” and continues to develop with a significant choral presence throughout, at times recalling, as in “Wo ist der neugeborne König der Jüden”, the style used by Bach to evoke crowd scenes in his Passions. Also remarkable is the descriptive colour of some recitatives, such as “Warum wollt ihr erschrecken”, which relates the threat of King Herod, or the inspired solo trio “Ach, wenn wird die Zeit erscheinen”, a wonderful sound sequence announcing that the time of Christ has come.

The final cantata, corresponding to Epiphany, evokes the adoration of the Christ Child by the Magi. Opening with the brilliant sonority of the chorus “Herr, wenn die stolzen”, this theme is reinforced by the re-entry of the trumpets. The power of God is proclaimed in the soprano aria “Nur ein Wink von seinen Händen”. The oboes we have just heard continue to reappear in subsequent fragments such as the aria for tenor, “Nun mögt ihr stolzen”, which restates the strength and power of the newborn Child. In the closing chorale, “Nun seid ihr wohl gerochen”, Bach once again returns to the melody of that same chorale which he had used in the St. Matthew Passion, mentioned in our comments on the first cantata, which is here combined with a prelude and a postlude and also features trumpets and timpani to conclude this magnificent epic piece of Christmas music.

Add your own review
User Reviews
/