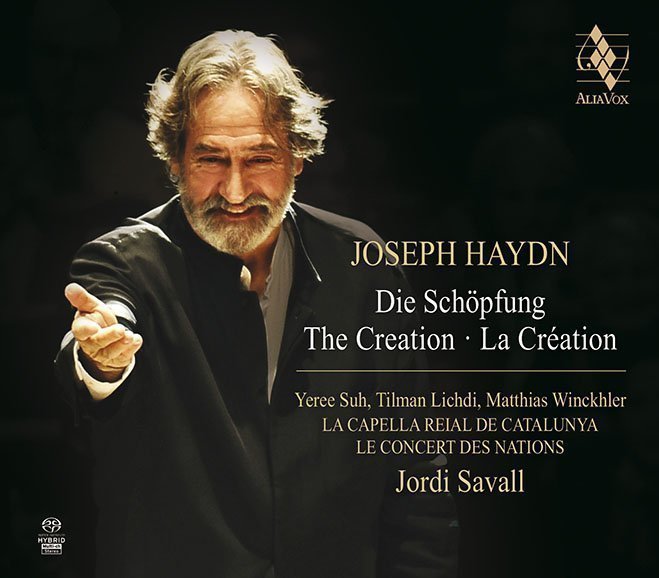 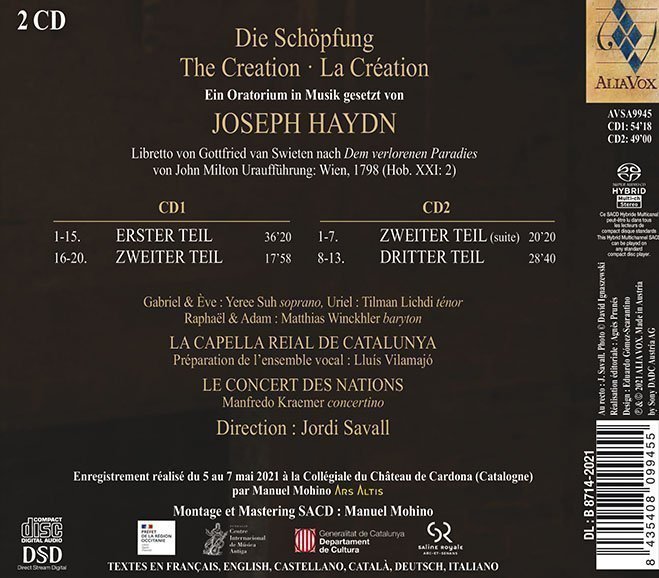 My interest and fascination for the work of Joseph Haydn date back to 1960-64, when I was completing my music and cello studies at the Barcelona Conservatoire and had the opportunity to discover and study some of the composer’s most beautiful quartets. During that time, two special pocket scores always accompanied in my apprenticeship of musical forms and the fascinating discovery of great masterpieces of musical creation: one was J. S. Bach’s The Art of Fugue and the other Haydn’s The Seven Last Words of Christ on the Cross. Two wonderful works that I later recorded under the ASTRÉE label a few years after having founded and prepared the appropriate music ensembles: L’Art de la Fugue, recorded in March, 1986, with 4 solo wind instruments and 4 violas da gamba from the ensemble HESPÈRION XX, following a year of concerts throughout Europe to celebrate the 300th anniversary of Bach’s birth. It was followed four years later, in December, 1990, by the recording of Haydn’s Seven Last Words of Christ on the Cross, two years after the creation of the orchestra LE CONCERT DES NATIONS. The latter work made such a profound impression on me that I felt compelled to “revisit” it 16 years later in October, 2006, and perform it at the Oratorio de la Santa Cueva (Holy Cave Oratory) in Cadiz, for which the work was commissioned and where it was first performed during Holy Week, 1787.

The next objective was to perform The Creation, one of the composer’s last masterpieces, with our orchestra LE CONCERT DES NATIONS playing instruments from the time of Haydn. It would not come about until – (thanks to the work carried out in our Professional Academies) our choral ensemble LA CAPELLA REIAL DE CATALUNYA comprised a fine choir specialising in the style of the period and, moreover, capable of singing in German. 15 years after the Cadiz recording, we achieved this new objective, this new Creation, which we now have the immense pleasure of presenting to you.

Let us briefly outline the life of Joseph Haydn (1732-1809). The Austrian composer descended on both his father’s and his mother’s side from peasant farmers and artisans from the village of Rohrau, where they had had lived for several generations. It was essentially a border town, a crossroads for Austrians, Hungarians and Slavs – notably Croats. It is therefore no surprise that the music of these diverse peoples should have left traces in Haydn’s music.

After a short stay at a boarding school in Hainburg, not far from his home village, Haydn went on to spend about ten years in Vienna as a cathedral chorister, where he gained some education before spending another ten years as an independent musician, practising his craft and absorbing as much music as he could. As Jens Peter Larsen points out, it was in 1760 – at the age of 28 – that he was appointed Kapellmeister (master of the chapel choir) in the service of the Esterhazy princes, with whom he would remain for many years first at Eisenstadt and then at Esterház, near the Austro-Hungarian border. Those were highly productive years, as the composer himself stated: “The prince was satisfied with all my endeavours, I received his approval; as head of an orchestra, I was free to experiment, to observe what enhances or detracts from effect, and, accordingly, to revise, make additions or cuts: in a word, to take risks. As I was cut off from the world, there was no one to make me doubt myself or vex me, so I had no choice but to become original.”

After Prince Nicolas Esterhazy’s death in 1790, Haydn was almost completely freed from official duties and over the next few years was able to embark on two long concert series in England, which greatly enhanced his fame in Europe. Together with Mozart, he was the principal representative of “Viennese Classicism” during the second half of the 18th century, joining the ranks of universally famous composers. His role in the evolution of European music continued to grow during the final years of the Baroque period, and he remained a key figure at the height of Viennese Classicism from around 1750 until the rise of Romanticism in 1800.

Haydn composed The Creation in 1796-98 and it was performed for the first time at a private concert on 30th April 1798, followed by a public performance in 1799. I shall not give a detailed description of the work here, as it is brilliantly explained and discussed by the leading Haydn specialist Marc Vignal in the accompanying text. I would simply like to recall the great sensation caused by the beginning of the work at its première. Apparently prepared for as much, Haydn seems to have jealously guarded his secret until the final rehearsal. Yet, the 60-bar Largo introduction entitled “The Representation of Chaos” was in line with a long musical tradition which, as Carl de Nys points out, was “faithfully observed by composers who were Freemasons, as can be seen in the Chaos from Jean-Féry Rebel’s ballet Les Éléments of 1737” (a work which we recorded in 2015, ALIA VOX, Ref. AVSA9914).

At the memorable concert of 27th March, 1808, attended by the aged composer who was carried in on a chair, when the audience broke out in the accustomed rapturous applause following the passage rising to a fortissimo after the Chaos, the introduction of Raphael’s recitative and the entrance of the chorus with its impressive succession of pianissimo and fortissimo, Haydn pointed heavenward with tears in his eyes, saying, “It all comes from up there!” These words are the sincerest proof of Haydn’s deep faith, one which sustained him as he composed The Creation, and he confessed that “as he worked, he had felt an extraordinary religious fervour.” However, this work was also inspired by the spirituality of the Viennese Masonic lodges of his day. Finally, we agree with Carl de Nys’s conclusion that “it is above all the first secular oratorio, in the sense that its message is addressed to all mankind, exactly like The Magic Flute, in operatic terms, and well before the Finale of Beethoven’s 9th Symphony.”