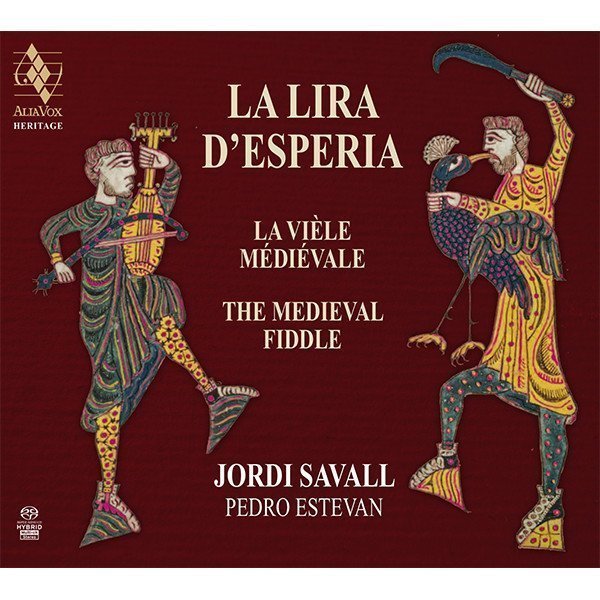 The earliest string instruments described in Greek mythology, the lyra and the kithara[1] are among those most frequently cited by the Roman poet Virgil (70-19 B.C.). According to Greco-Latin tradition, Apollo invented the lyre, while Orpheus invented the kithara.

From ancient times, there have been constant references to the extraordinary power and effects that music and musical instruments have over people, animals and even plants and trees. Such were the characteristic attributes of Orpheus, whose magical gifts as a musician inspired one of the most mysterious and symbolic myths in Greek mythology. With its origins lost in the mists of time, this myth gradually took on theological proportions, giving rise to a vast and often esoteric body of literature. Orpheus is the musician par excellence, whose enchanting melodies charmed wild beasts, caused trees and plants to bend down before him and soothed even the fiercest of men.

Hesperia (Esperia in Italian) was the name given in Antiquity to the two most westerly peninsulas, the Italian and the Iberian. According to the Greek philosopher Diodorus, this was also the location of the Hesperides, or Atlantis, a wondrous garden where the magical Golden Apples (…oranges or lemons?) were to be found.

And it is in Iberian Hesperia that we find the earliest references to bowed instruments. Unknown during Antiquity and in the early Middle Ages, the use of the bow to draw sound from string instruments, according to one of the most likely hypotheses, seems to have been introduced into Europe via Arabo-Islamic countries. We should not forget the high degree of sophistication achieved by Arab and Byzantine cultures by the tenth century and the importance of the cultural exchanges – often as a result of conflicts – that existed between East and West. It is not surprising, therefore, that the earliest European representations of bowed instruments are to be found in 10th century Mozarabic manuscripts of Hispanic origin: Beatus de Liebana (c. 920-930) and in various Catalonian manuscripts, including the Bible from the Benedictine abbey of Santa Maria in Ripoll.

The medieval fiddle thus emerged as one of the favourite instruments of the troubadours[2], jongleurs[3] and, in particular, of the nobility who enjoyed playing the fiddle when their martial pursuits were over, as may be seen from the many references in the literature of the time and from iconographical sources, such as the seal of Bertrand Il, Count of Forcalquier (Provence), which on one side represents him armed and on horseback, and on the other playing the fiddle. These noble musicians were known as nobles jongleurs to distinguish them from the professional jongleurs, their musical activities being for pleasure rather than a means of earning a living; music for them was one of the exercitia liberalia (noble or liberal pursuits). In medieval times, therefore, the fiddle (along with the harp) was indispensable to courtly and lordly life.

Notwithstanding all these important iconographical and literary references, hardly any original bowed string instruments dating from before the 13th century have come down to us. The earliest example of a five-stringed bowed instrument (dating from c.1255-1275) was found in excavations in Poland in 1941. In order to understand the characteristics of these instruments and how they functioned, we need as much information as possible from the following sources:

I – Iconographical: throughout the medieval period, instruments are to be found represented in sculpture (capitals, cloisters etc.), frescoes, paintings, illuminated manuscripts, stained-glass windows, and so on.

II – Historical and Literary: numerous references to musical instruments and techniques, instrument-making and how the instruments functioned are to be found in chronicles and other literary, philosophical or musical texts.

III – Musical: information may be obtained from extant original works or from works that can be pieced together from the manuscripts of vocal music from that time.

IV – Traditional: much can be learned from all the research that has been carried out into our oral folk heritage, which has been preserved in an historically and formally pure state.

When it comes to reconstructing this medieval repertoire, we are faced with a number of basic problems: Which instruments were used? What sort of sound did they produce? What music was played?

Regarding the instruments, we have used four distinct types, all of them with gut strings:

Judging from the shape of the instruments and the type of bow and strings used as reflected in the iconographical sources, it is obvious that the concept of ideal sound at that time must have been very different from that of today. Only the sound and technique of certain present-day folk instruments, as played in Greece (Crete), Macedonia, Morocco, India, and so on, can give us a rough idea of what this ancient music must have been like: in dance or folk music, the sound may be archaic and sometimes primitive, but the result is always full of life and expression; where lyrical, poetical or courtly music is concerned, the sound is more modulated and refined, as the Spanish poet and ecclesiastic Arcipreste de Hita tells us in his Libro de Buen Amor (c.1330):

Regarding the music, we have chosen works from a variety of sources:

All these pieces are closely related to the cultural world that was typical of ancient Hesperia, where the three main cultures of the Mediterranean world – Jewish, Islamic and Christian –existed side by side for so many centuries. With this in mind, we have divided the programme into three sections plus a conclusion. Each section contains a set of three works from these three cultures, plus two pieces of courtly music taken from a manuscript in the British Museum (add. 29987) containing 14th century Italian music.

As Johannes de Grocheio[4] points out in his Ars Musicae, the different forms of music at that time had distinct poetic and social functions, according to their content and character: among the songs in the vernacular, he mentions the cantus gestualis, the cantus coronatus and the cantus versualis, and for instrumental music, the rotundellus, ductia and stantipes[5].

He also describes the bowed fiddle (vihuela de mano) as the most delightful of all string instruments: in se virtualiter alia continet instrumenta (it is capable of replacing many different instruments). Of course, he adds, during feasts, tournaments and jousts, drums and trumpets are also used to fire men with passion, but in viella tamen omnes formae musicales subtilius discernuntur (in the fiddle all sorts of subtle music are to be discerned).

Although based on the maximum historical and musicological evidence, this programme is not intended to be either a hypothetical historical reconstruction of a concert of that time or a musicological study of facts that cannot – and will never – be known with absolute certainty.

What we propose here is an attempt – inspired by the styles corresponding to each of the cultures concerned – to recreate a certain art of sounding the bow over time. Above all, this programme is a tribute to all the jongleurs and poet-musicians who were convinced that through music the soul could be moved to boldness and valour, magnanimity and generosity – all qualities that dignify the good governance of peoples:

[1] The lyra originally had a sound box made from a tortoiseshell and was used for musical education and amateur enjoyment. The kithara was the instrument of professionals and was used in musical contests, public festivals etc.; its sound box was constructed from wood.

[2] Members of a class of lyric poets, living in southern France, eastern Spain and northern Italy from 11th-13th c., who sang in Provençal (Langue d’oc) chiefly of chivalry and gallantry; sometimes including wandering minstrels and jongleurs. (O.E.D.)

[4] French music theorist who was flourishing round about 1300.

[5] Grocheio divided musica vulgaris (in the vernacular) into two categories, cantus and cantilena. Each of these was then given a triple subdivision. The three forms of the cantus were cantus gestualis, cantus coronatus and cantus versiculatus (or cantus versualis). Cantus gestualis obviously meant chanson de geste, but the distinction between the other two is not at all clear. The term cantilena was applied to the secular refrain forms that Grocheio identified with the music of the people of northern France – hence the three subdivisions: rotundellus (rondeau), and (without text) stantipes (estampie) and ductia. The ductia was a textless instrumental composition with a regular beat – e.g. the pieces entitled danse in the Manusctit du Roi. (For all these subjects, see articles by H. Vanderwerf and E.H. Sanders in the Grove Dictionary of Music and Musicians.)