LES ROUTES DE L’ESCLAVAGE (ALIA VOX 2016) has been nominated to “Best classical Compendium”. It is the 7th nomination that Jordi Savalls receives, besides having won the award, in 2010, for DINASTIA BORGIA (Best Small Ensamble Performance). The final decision will be known on January 28th during the 60th ceremony of the Grammy Awards.

“The music in this programme represents the true living history of that long and painful past. Let us listen to the emotion and hope expressed in these songs of survival and resistance, this music of the memory of a long history of unmitigated suffering, in which music became a mainspring of survival and, fortunately for us all, has survived as an eternal refuge of peace, consolation and hope.” 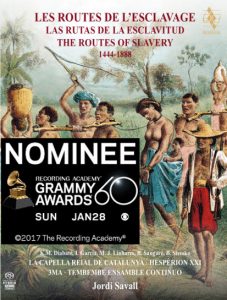