The title of this programme, Ars Lachrimæ, takes as its principal reference John Dowland’s masterly and inspired pavan. In aesthetic terms, it is a profoundly original meditation on musical emotions as a reflection and paradox of human existence. 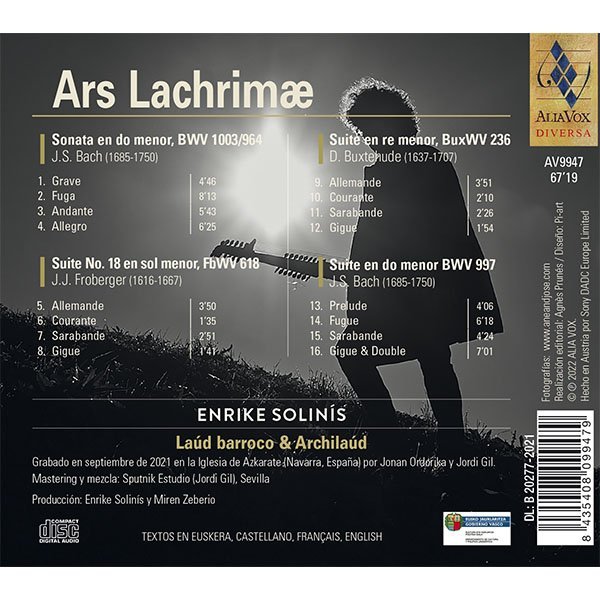 The title of this programme, Ars Lachrimæ, takes as its principal reference John Dowland’s masterly and inspired pavan. In aesthetic terms, it is a profoundly original meditation on musical emotions as a reflection and paradox of human existence. The piece is a paradigm of how the rich musical tradition of the Renaissance poured its final musical inspiration into the lute and of how composers such as the English John Dowland endowed the instrument with a basic idiom and distinctive musical character. Although not expert lute players, later composers succeeded in harnessing this character as a catalyst for their own creativity: an intimate, gentle and melancholy pathos that can be traced back to the instrument’s arrival in southern Europe with the Arab musicians of the Iberian peninsula.

With their ephemeral sound, plucked string instruments have always captured the fleeting spirit of each era: faithfully accompanying the exiled warrior and soothing the unhappy laments of the spurned lover, as well as scaling the giddy heights of festive expression. For centuries, their players have formed a select guild of musicians capable of nurturing great ideas from the solitude of their modest instrument; thanks to the art of adaptation, their ingenious and transformative idealism has readily embraced the most inspired works of each era, enabling them to attract the interest of composers who, at first sight, might seem far removed from the instrument, such as Handel, Domenico Scarlatti and even the great Johann Sebastian Bach.

Another singular quality of the lute lies in its having comprised a large number of different models, variants and tunings, which have existed simultaneously throughout its long history. The choice of a specific instrument therefore entails an important a priori performance decision. In my opinion, and particularly in view of the keys chosen by Johann Sebastian Bach for his principal works for lute (such as BWV 995, 997 and 999), the ideal instrument for playing his music is the lute with the most conventional historical tuning, that of the Renaissance lute tuned to G, D, A, F, C… It was by definition the domestic lute in Europe during the Baroque period, and, judging by Bach’s scores, it seems likely that, although he was not a professional lutenist, he played it with some skill and was sufficiently well acquainted with the finer points of the instrument to be able to compose works for it that were relatively easy to perform.